Secure your spot and get started today with our EXCLUSIVE offer!

Secure your spot and get started today with our EXCLUSIVE offer!

We have been so happy with our 11 year old sons guitar lessons, he is loving music and is so excited for his lessons each week. His instructor has been so patient. They have been willing to work around schedule changes. We would highly recommend Sandy Music Academy.

I have been amazed at my daughter’s progress in her first year of piano lessons at Piano Masters. Kristen is so patient and has a great way of making the lessons fun and with variety. There are monthly practice incentives and even sometimes ice cream! Communication is great, with weekly emails to know what my daughter is working on. It makes all the difference to have a teacher who loves music and teaching. I would definitely recommend.

My son has enjoyed taking piano lessons, and has learned a lot over the last year. We are very pleased. 🙂

My daughter likes her teacher. Seems to motivate her in other areas of her life as well.

They are great! Excellent instructor who is patient and able to adapt to student's learning style.

Kristen is the most patient and amazing teacher ever. She is a friend to my kids and treats them like her own.

Great instructors.
Easy to work with.

We love Addie! She is so great with our daughter and makes learning fun. Our daughter has learned a lot from her so far on how to use her voice properly and sing with confidence. Highly recommend Sandy Music Academy!

A Merry Little… Trash Can? 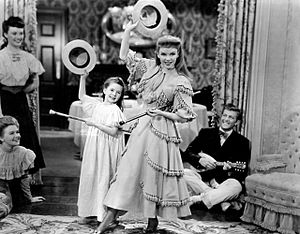 Many know the famous tune of ‘Have Yourself a Merry Little Christmas,’ but what they don’t know is that the song was one person away from never being produced. In 1944, Hugh Martin was playing around with a “madrigal-like” tune that he just couldn’t make work. After two or three days, he simply threw it away in the wastebasket. His songwriting partner at the time made him dig it out!

The song was originally being written for Meet Me in St. Louis, but the original version of the song was too sad for the scene, according to the producers. After they found the perfect amount of upbeat-ness, the producers requested a rewrite. The original lyrics consisted of, “Have yourself a merry little Christmas // It may be your last // Next year we may all be living in the past.”

However, today, there are two versions of the song that remain popular. The first is the original from the movie, which sings, “Someday soon we all will be together, if the fates allow. Until then we’ll have to muddle through somehow,” which fits nicely with the pandemic raining on all our parades! Frank Sinatra’s version replaces this line with, “Hang a shining star upon the highest bough.”

What are some of your favorite Christmas tunes to listen to around this time of year?